The recipe is easy to prepare and its presentation is impressive.

Please let me know what you think of this recipe. You may post a comment to this blog if you wish. 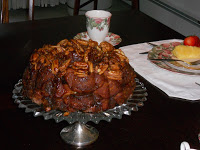 Spray bundt pan with non-stick spray. Spread pecans on bottom. If you are using crumbled bacon, also spread it on bottom of pan. Set this aside.

In gallon size Ziploc bag mix ¾ cup sugar and 2 tablespoons of cinnamon. Place biscuit three at at time in Ziploc bag. Shake well until each is coated.

Place pieces into a bundt pan on top of the pecans. About six biscuits will form a first layer. Stagger each layer. You will have about four layers.

Bake until golden brown for about 35 minutes in 350 degree oven. Serve warm.